Meet Jordan Mailata from the Philadelphia Eagles! This guy is 6’8”, 365lbs, and an incredible athlete… but don’t let that fool you. He’s also an amazing singer and I had the privilege of working with him last winter for The Masked Singer, as his vocal coach. His joy for life and for singing is infectious. It was non-stop laughs, which made all the hard work behind the scenes, so enjoyable! Today I’m sharing about my time with Jordan and how can teach teach us as singers to be better equipped for the music industry.

(Btw – Here we are in one of our little secret warm up rooms. The beautiful lady between us  in the photo below is his sweetheart Niki!) 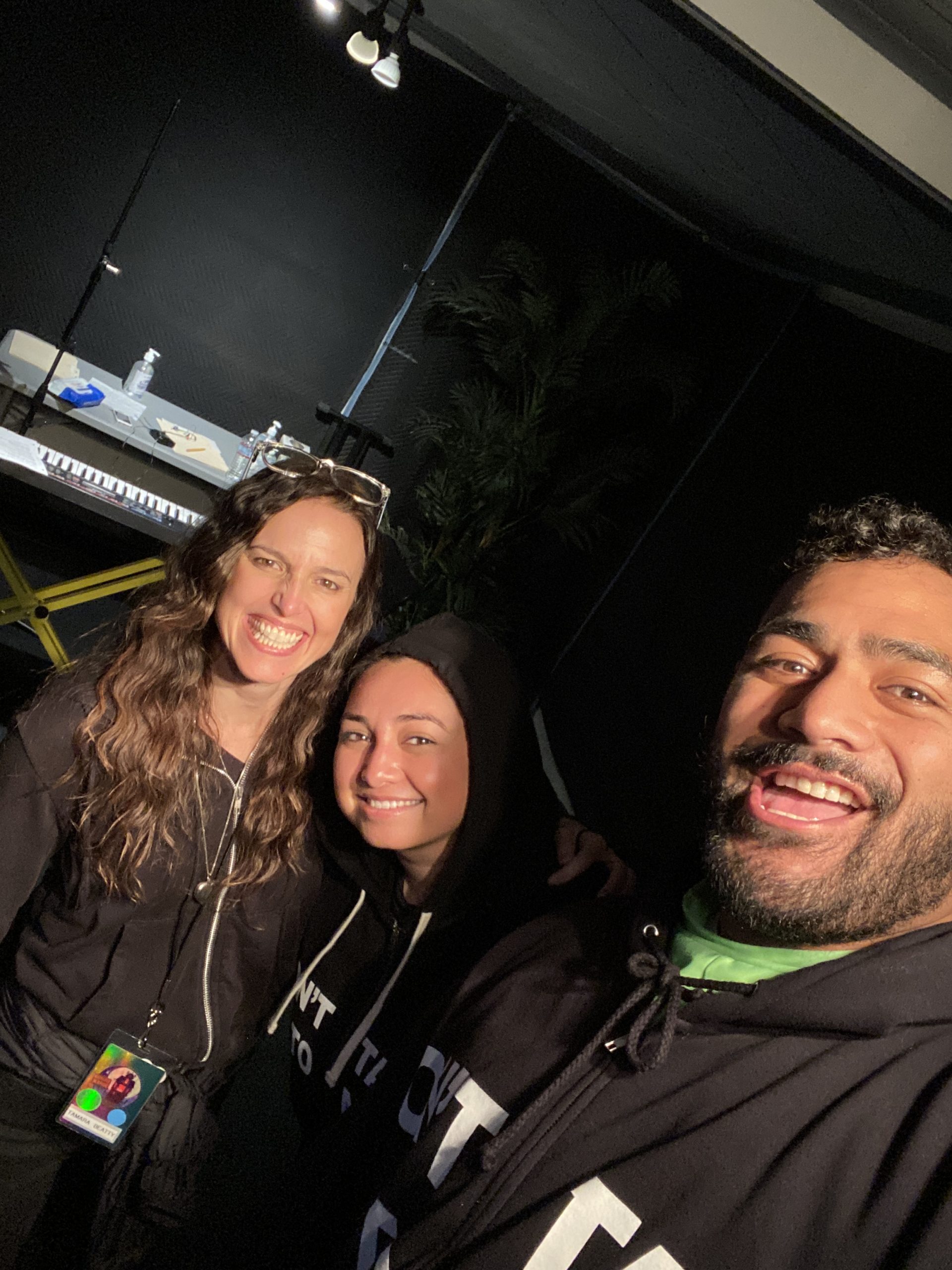 Jordan is a force to be reckoned with. He was an Australian rugby player before he became an NFL star. In fact, he had never even played football before he was scouted! It wasn’t on his radar. When he was approached, he was thrown into a completely new game. He hadn’t been playing since he was little so he didn’t know the language of the sport. In fact, at that time, he didn’t even know the plays of the game. His talent what THAT clear. But he had so much more than his athletic talent. And it is these extra attributes that, in my opinion, make him not just a success – but a lasting success.

Before I jump int those attributes, I gotta say that I LOVE working with pro athletes. It is one of my very favorite things to do. They know how hard they have to work to get the results they want. They’re used to rigorous training schedules and aren’t afraid to give their all. And they also know how to have fun while doing all this. Above all, my favorite thing about working with professional athletes, is that they know how to rely on a coach, take feedback, and make the changes recommended for their success. They trust the coaching process. And frankly, when I think about what inspires me most about coaching, it’s literally the coaching. I love being present with someone – and that moment we find the thing that allows them to get out of their head. It’s like a puzzle to find out exactly what that person needs and how we can create an environment in which they can find success. As a coach, it’s always fun to push through the levels of work necessary to chase goals and watch them crush what we’re working on!

Now… Back to Those Attributes!

It’s one thing to have talent. It’s another thing to be able to take that talent into a very specific arena (like pro sport, or pro-level touring as an artist) and gain momentum. Many singers I see who are striving to get to the ‘next level’ of visibility or acknowledgement, have it wrong. They think that their ‘product’ alone will take them to the next level. But this is only one piece of the pie. You also need other qualities. All of which I saw in Jordan as we worked together.

Attribute #1 – Have fun in the Face of Pressure and Criticism

The first one is to be able to have fun (and like yourself) in the face of criticism and a barrage of feedback. No one tells you that. If you’re too serious and worried about everything, you’ll burn out quickly. Jordan is so light-hearted, joyful, kind, and has an amazing sense of humor. In my opinion, this allows you to withstand what could otherwise be very difficult times, and can keep you going strong!

Let’s move on to the second attribute that I saw in him, that I think is so important for singers. It relates to my comment previously about athletes like being coached. He, like many athletes, are so good at this one. When he receives feedback, he doesn’t take it personally. Just because there is something that could be improved, it doesn’t mean you’re no good at it. It doesn’t mean you’ve failed. And it doesn’t mean that you can’t proceed without fully fixing the issue. It simply means that there’s an area of growth. And putting time, attention (and a little light-hearted fun and humor) into it, it will make your performance that much better! Athletes in general are usually very used to receiving a lot of feedback at once. If you’re able to not take things personally in the industry, it helps so much! That brings me to the third and final attribute.

Here’s the one that can save you a lot of unnecessary stress. As an athlete you need to be able to take in a lot of information and assimilate it. As you assimilate it, you need to be able to do it in a way that doesn’t hinder your performance. Jordan was such a trooper at this. Let me paint the picture. The songs we were working on sounded great in the practice room! But that wasn’t going to be enough, and Jordan knew it. In addition to his singing, he had intense choreography he had to be able to do. All while being in the tallest costume (10 feet tall) that has ever been on the show. In it you can’t breathe well or see well. So I had to give a lot of feedback at one time in order to help with these circumstances. Many singers, when they receive a few points of feedback, freeze. Or, they focus on details in a way that do not bring results. Instead, this type of focus breeds a lack of confidence. Jordan was so good at taking in a lot of things and once, and prioritizing on the spot what needed the most focus. This third attribute is very important in the music industry where you will receive a lot of feedback. And that is – to be able to focus in on the details (sometimes many at a time) and NOT ‘Over-focus’ or freeze.

How These Attributes Help You as a Singer!

How does this relate to you? If you’re in the industry, or wanting to sing for a living, or if you want to go out and get gigs, then you have to put yourself ‘out there’. And when you do, it may be helpful to consider, that talent (and a good ‘product’) are NOT the only factors that contribute to success. In my mind, these three factors are invaluable.

1-Being able to have fun in the face of pressure and criticism. 2-Being able to NOT take comments or feedback personally. 3-Being able to focus on something that can get you improvement, without ‘over-focusing’ or freezing. Just something to consider!

Another thing you may not have considered… the physical workouts we do for our body can negatively impact our voice. I talk more in depth about this whole subject in last week’s post (see that HERE!) Click below to check out one of my favorite performances from Jordan!

Ready to take your voice training to the next level?